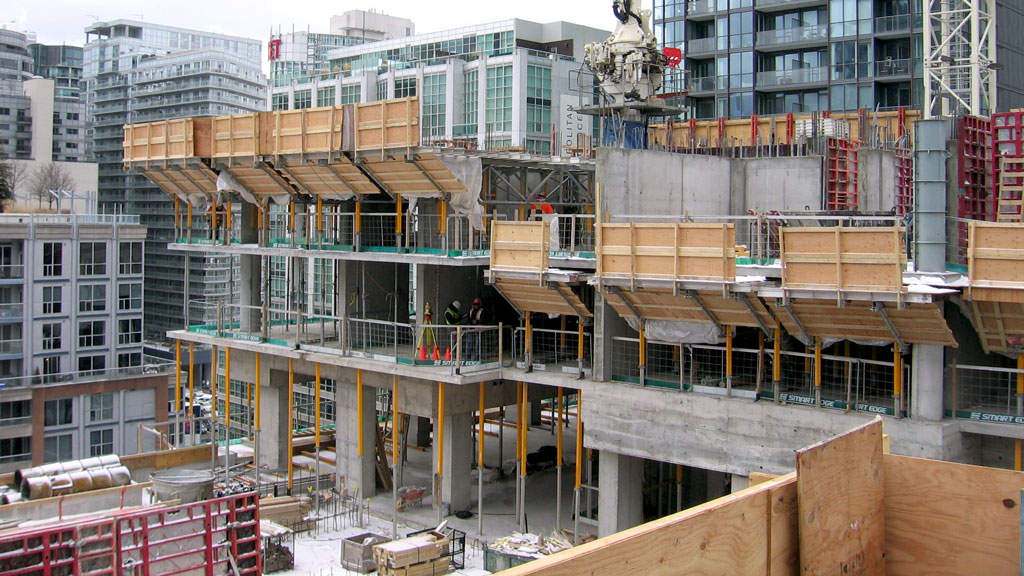 ELLISDON—Pictured here is the start of typical floors in the King Blue, South Tower.

Designed by Page+Steele/IBI Group for the Greenland Group and built by construction manager EllisDon, the complex consists of a 48-storey north tower and 44-storey south tower (including podiums) and a five-level underground parking garage on the site of the former Canadian Westinghouse factory.

The original 22.9-metre-high, three-whythe-thick walls of that building were incorporated into the north tower podium as a facade along King Street and Blue Jay Ways, a small street on the west side.

“It’s the highest facade restoration in Canada as far as we know,” says Annabel Vaughan, project manager with E.R.A Architects, the heritage consultant.

Although in “fairly good shape” the facade needed work, says Vaughan who gives high marks to Clifford Restoration for its long list of restorative measures including brick repointing and the repair of the terracotta which frames the windows—with some new pieces added.

The heritage contractor also installed approximately 30,000 reclaimed bricks from the Westinghouse building as a veneer on the podium’s east and south sides. Other aspects of the restoration included the installation of new steel windows with the “historic profile” of the original ones.

The retention/incorporation of the facade was the most complex component of the project which got underway in 2015, says EllisDon project manager Neil Christian.

It had to be supported by a special steel-truss system while it ‘floated’ over the garage excavation area. Subsequently, it was supported by the new foundation and then connected to the podium at every floor before the restoration could begin, he says.

There were also some challenges on the concrete ledger of the project.

Approximately 50,000 cubic metres of concrete were installed and a number strategies and operating procedures were put in place. The included stick built formwork on the podiums, the use of the Peri RCS formwork climbing system on the towers, utilizing both an electric and diesel concrete pump, and a “staggered approach” to pouring the concrete.

“We wanted the towers to go up at the same time,” says Christian, explaining that this enabled interior work, such as mechanical/electrical systems to commence concurrently.

To meet that objective forming subcontractor Premform Limited used separate teams for the towers—with some overlapping between each, he says. 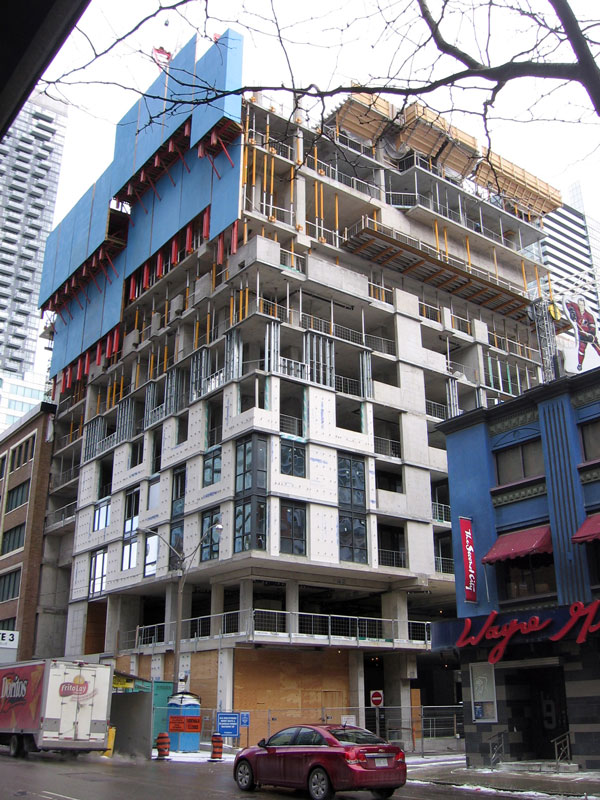 Because it would have interfered with traffic and, in particular, the movement of streetcars, concrete deliveries couldn’t be made from King Street.

Instead, they were made at two alternate locations. The first and main location was a one-way westbound street known as Mercer at the south end of the development.

“We took over one of the lanes (on Mercer) and the sidewalk,” says EllisDon assistant site supervisor Kevin Ryan.

In a fenced-off staging area on that street, there was enough room to accommodate two concrete trucks—one truck driver making the delivery while the second waited.

The Mercer Street staging area was the location of the electric pump, which supplied approximately 80 percent of the concrete. Just to the east is a hotel and that played a large factor on why the pump was placed there.

“It’s quieter (than diesel) and there is less fumes,” says Ryan, explaining the intent was to avoid complaints from the hotel, especially if work continued after 7 pm and a formal complaint could be lodged.

As for the diesel pump, it operated from a courtyard between the towers. There was just enough space to accommodate two trucks which had to back into that space along an alleyway, he says.

The piping could be reconfigured from each pump to service either the north or south tower.

Each floor took about four days to complete, including the floor slabs and walls, and the repetitive nature of the tower erection allowed EllisDon to submit its concrete orders to CBM near the end of one week for the following week.

“We knew our schedules and quantities,” says Ryan.

With two batch plants in Toronto, the ready-mix concrete supplier was able to meet those time lines. There were occasions, however, that concrete trucks would be delayed by traffic congestion or other reasons.

“When that happened we would have to slow down the pour or the line would dry out.”

Ensuring a timely and consistent supply was also the rationale for the staggered approach where pouring would be occurring in one tower, while other phased work such a building/ taking down the formwork or installing rebar was underway in the second tower, he says.

There were some construction disruption and occupancy delays because of COVID-19, says the Greenland Group’s director of construction and contract, Liwen Deng.

“But we worked hard to ensure that we were able to receive permits despite many obstacles, including the City (of Toronto) shutting down for a period of time.”

The north tower podium has been reserved for commercial uses including Qube Hotel, a part of the Greenland Hotel Group Division. Other commercial and retail users will be announced at a later date. All of King Blue’s 914 units have been sold, says Deng.

As for the restoration of the facade, she says Greenland want to contribute to the vibrancy and energy of the neighbourhood and that has been accomplished by combining the complex’s historic and modern elements.